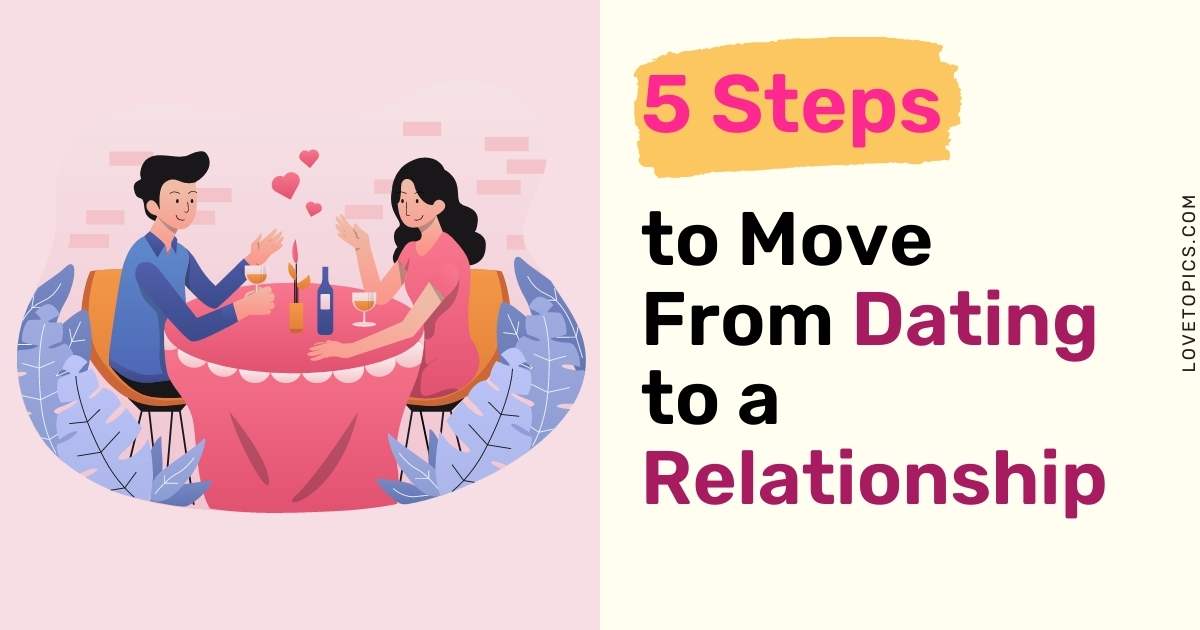 Have you been dating someone that you’d like to be in a relationship with? But you’re not quite sure how to move from casual dates to a committed relationship? Well, you came to the right place!

Moving from dating someone into something more serious is a big step. It can make you a little nervous, especially if you’re the one initiating it. We’ve made the process simple by breaking down what you need to do into just five, easy-to-follow steps. Read on to find out exactly what to do to start a relationship with the person you’ve been dating.

1. Date Long Enough to Get to Know Them

Make sure that you’ve been on enough dates to REALLY get to know them before announcing that you’d like to take things further. We told you in our article, The Differences Between Dating and Being in a Relationship, that most people think you should go on at least 5-12 dates before entering into a relationship.

This is a wide range of dates, and unfortunately, there’s no magic number. You’ll need to determine if you’ve been on enough dates with this person to know who they are and if they are a good match for you. There’s no need to rush things if you aren’t quite sure yet.

2. Make Sure They Check the Boxes

On your dates, you should be asking thoughtful questions that help you ensure that this person is actually right for you. Even if you don’t have a dating checklist, you should have a good idea of what you’re looking for in a serious partner.

Make sure that this person has the qualities you’re looking for, shares the same values as you, and is headed in the same direction as you are. For example, if you haven’t discussed whether they are looking for a serious relationship or not, you may want to hold off on asking them to start one with you. One of the advantages of online dating is that a lot of these questions are answered early on by their dating profile. However, it’s still a good idea to follow up on these things in person.

You need to identify any red flags at this point as well. There are a ton of things that can be red flags so catching them all at this point can be difficult. However, pay attention to how this person treats you, treats other people, and how other aspects of their life are going for them.

4. Have a Conversation About Where Things Are Going

If the person you’ve been dating shares chemistry with you and seems to have the qualities you do want and doesn’t seem to have the ones you don’t, then you might be ready to move into a relationship with them. Chances are that they are feeling the same way. The next thing you need to do is to have a conversation with them to see if they’re feeling the same and if they would like to move on to something more serious with you.

“Hey! I’ve been having a great time getting to know you. I love spending time with you. You’re kind, generous, and everything I’m looking for in a partner. I’d like to take the next step and be in a relationship instead of just dating. I’m not sure if you’ve been dating other people, but I would want to be exclusive. If you feel the same way, I think we would be great together.”

If they agree that things are going great and they want to start a relationship with you, that’s great! They might not be ready for that or they might let you know that they don’t think you’re as good of a fit as you think. Either way, this conversation will get you to the next step of ending things or moving into a relationship.

5. Stop Dating and Start a Relationship

Moving from dating to a relationship doesn’t mean you stop going on dates altogether. It just means that you’re now in a relationship as opposed to casually dating. At this point, the both of you would take down any dating profiles if they are still active, stop talking to other romantic interests, and move forward together.

You might start introducing each other to your friends and family as well as start including them in group activities and special events. How fast or slow you take the relationship will depend on the comfort level of both people. It’s important to keep the lines of communication open as you work on the foundation of your relationship.

Going From Dating to a Relationship FAQ

At what point does dating turn into a relationship?

You don’t magically turn casual dating into a relationship at a certain point or after a specific length of time. You must have a conversation with the other person and both agree to be in a relationship together. If you haven’t had the conversation, you aren’t in a committed relationship with them.

How do you transition from casual dating to a relationship?

If you’ve been dating someone and you feel like things are going great, the next step is to have a conversation with them about whether or not they want to move on to a relationship. This conversation can be face-to-face, over the phone, or even via text message. If they agree that they want to be in a relationship with you, then you can stop dating other people and start being exclusive with each other.

What do you do when the person you’re dating doesn’t want a relationship?

What should you do before starting a relationship with someone you’re dating?

What if their dating profile said that they are looking for a serious relationship, but they want to keep things casual?

Unfortunately, one of the disadvantages of online dating is that it makes it easy for people to be dishonest. Someone might think that they have a better chance of getting dates if they write down that they are looking for something serious. If you notice that someone doesn’t seem like they are actually looking for a relationship, it’s best to ask them and not waste your time waiting for them to change.

Going from dating to being in a relationship can seem intimidating. Hopefully, now you see that it isn’t! People move their relationships forward every day and if they can do it, so can you. As long as you’ve found a compatible person that feels the same way about you, starting a relationship with them should be a fairly easy process.