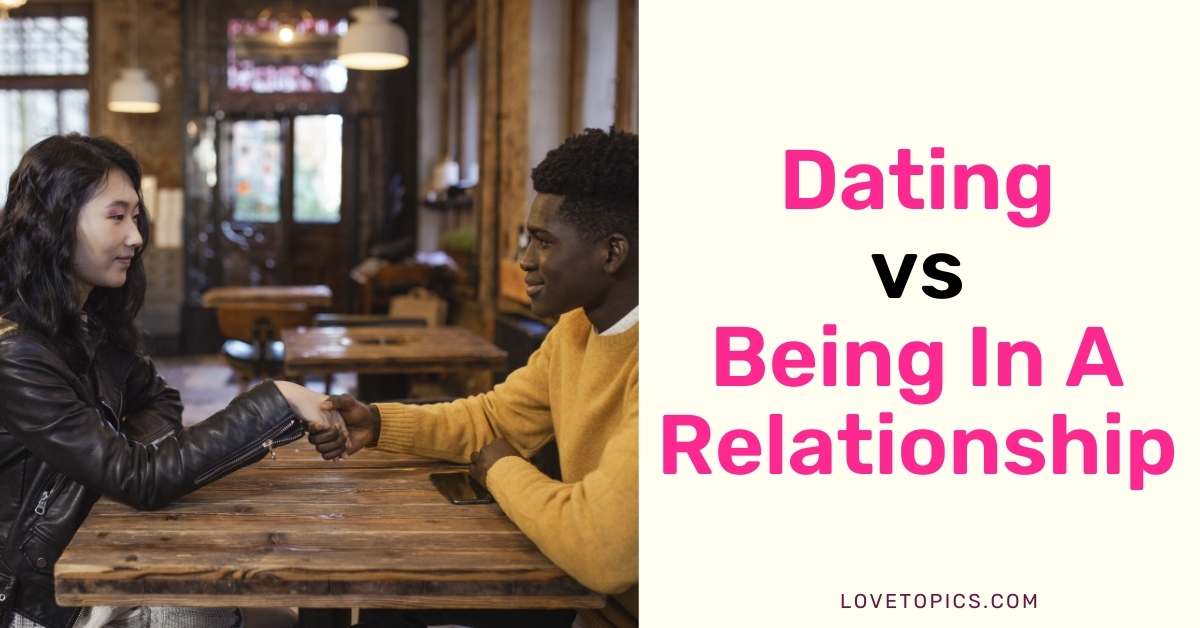 It’s hard to distinguish between the two because of the overlap of the terms and it’s a gray area for a lot of people. We’re here to help you figure out the difference between dating someone and being in a relationship with them. Let’s take a look at the meaning of both terms and the differences between them.

*Not all relationships look the same and that’s what makes them great! For these examples, we’ll look into the differences between dating and being in a monogamous relationship.

What It Means to Be Dating

When you’re dating someone, this means that you’re regularly going on dates with them. This is usually at the beginning of the relationship when you’re hanging out with each other to see if you’re a good fit romantically. There is no time limit to dating, thus making it hard to pinpoint the time that dating someone moves to a relationship.

While dating someone, you haven’t committed or asked them to be in a relationship with you. This means that one or both of you could still be dating other people trying to find the best match. Or if you’ve hit it off, you might have established that you will be exclusively dating each other. Meaning that you aren’t dating anyone else, but you aren’t in a relationship quite yet.

You don’t have to stop dating someone. But they will most likely want to move on to something more serious with you at some point. Or they might want to move on with someone else they meet. Many people end up casually dating for quite a while without the expectation of meeting someone serious.

Alice and Bob have been dating for a few months now. They met online and connected while chatting because they have similar interests and felt they should meet. They have been on several dates. However, they haven’t discussed committing to each other or starting a relationship.

They are both still seeing other people right now. Neither of them has brought up anything serious or asked where the two of them are headed. They are still feeling each other out and keeping things casual. At this point, there are no expectations and whether they will see each other again or not is still a question after each date.

What It Means to Be In a Relationship

In most cases, adult relationships start after a series of dates. Once two people have gotten to know each other, they usually discuss where things are headed. If they both agree that there is a connection and that they’d like to be exclusive and more serious, then they enter into a relationship.

Once in a relationship, the other person becomes a bigger part of your life. You introduce them to your family and friends and make long-term plans with them. If things are going great, you might move in together, get engaged, and then married.

Alice and Bob continued dating. They had been spending most of their weekends together, and things had been going well. Bob wasn’t interested in any of the other women he had been seeing and felt something special with Alice. So, Bob asked Alice if they could take the next step and if she’d be his girlfriend. Alice had felt the same way and agreed that they should start a relationship together.

Alice and Bob are now in a committed relationship. They call each other “boyfriend” and “girlfriend”. They are still going on dates but aren’t considered to be dating since they are in an exclusive relationship now. They’re making plans together and including one another in their lives more and more. This relationship could be moving toward something more serious!

13 Differences Between Dating And Being In a Relationship

Here are 13 differences that set dating and being in a relationship apart from each other.

1. Getting to Know Each Other

In a relationship, you are exclusive with your partner. You’ve committed to being with them and only them. On the other hand, when dating, you could be seeing many different people while trying to find the right one. It’s generally acceptable to be dating more than one person at once because you haven’t made a commitment to anyone.

While there’s no expiration date on dating someone, people don’t date forever. It’s likely that at least one of them is looking for something serious and would like to be in a relationship at some point. Dating usually ends after one or two dates when the two people realize they aren’t a great fit. Or, they may date for a while and then move on to a relationship.

We’ve found that most people go on anywhere between 5 and 12 dates before they move into a relationship.

Being in a relationship can last forever. Although relationships can still end as early as after the first three months, they can last and turn into a marriage.

While dating isn’t serious, being in a relationship requires more commitment. You can simply say “no thank you” to another date with someone. However, if you want to break things off in a relationship, you’ll have to find a way to break up with them. This is because you agreed with them that you’d be together. So, if you change your mind, you have to let them know.

You can’t have a lot of expectations while dating beyond the fact that they will meet you where you agreed on for your date. Meanwhile, when you’re in a relationship, you come to expect certain things from your significant other.

Although you might find yourself falling for someone you’re dating, you usually don’t say “I love you” or exchange those feelings at this point. The mutual feeling and expression of love usually come later when you’re in a relationship. If you told someone you love them on a third date, it may scare them away because that’s way too soon for a lot of people. However, when you’re with someone seriously, you don’t have to filter your feelings.

There are no anniversaries or special milestones when you’re just dating someone. This might be because you usually don’t just date for a year and have a date-anniversary. When you’re in a relationship, these milestones can be a big deal and a testament to how things are going.

When you’re dating someone, you usually don’t spend any holidays together. The two of you will be apart celebrating with family and friends. This isn’t true for all holidays. New Year’s Eve is a casual enough time to bring someone you’re just dating to a friend’s party. However, times like Christmas, Thanksgiving, and Easter are usually saved for more serious relationships and family.

When you’re in a relationship, you’ll probably share some Christmas and other holiday traditions.

You have to ask the person you’re dating out each time you want to see them. They may or may not make themselves available. Meanwhile, in a relationship, you get into a groove and are with each other a lot of the time without planning it like a date.

When you’re dating someone, you usually aren’t comfortable around them. For one, you don’t know them that well. Also, you are usually worried about what they think and how they are perceiving you. Dates can be nerve-wracking as your goal is to impress the other person. Once You move into a relationship with someone, they know you very well and you can let your guard down around them.

When you’re just dating someone, you probably don’t announce it to the world. You might tell a few close people how your date went and some details about the other person. But they aren’t included in your casual conversations as a main character in your life. When you enter into a relationship with someone though, you include them in your conversations with friends, coworkers, and family members because they are significant in your life.

Are dating and being in a relationship the same thing?

No, they are not the same thing. Dating is more casual and doesn’t involve commitment while being in a relationship is more serious and committed.

You aren’t boyfriend and girlfriend until you establish that you are in a relationship with each other. When you’re dating, you’re usually vetting the other person to see if they’d make a good boyfriend or girlfriend.

How do I know if we’re in a relationship?

Can you be dating but not in a relationship?

Yes, you can be dating and not be in a relationship. Dating is casual and doesn’t require you to label it. You aren’t locked down or committed when you’re dating a person or multiple people.

If you are still wondering what type of situation you’re in, you can ask the other person what their intentions and plans are to see if you’re on the same page.