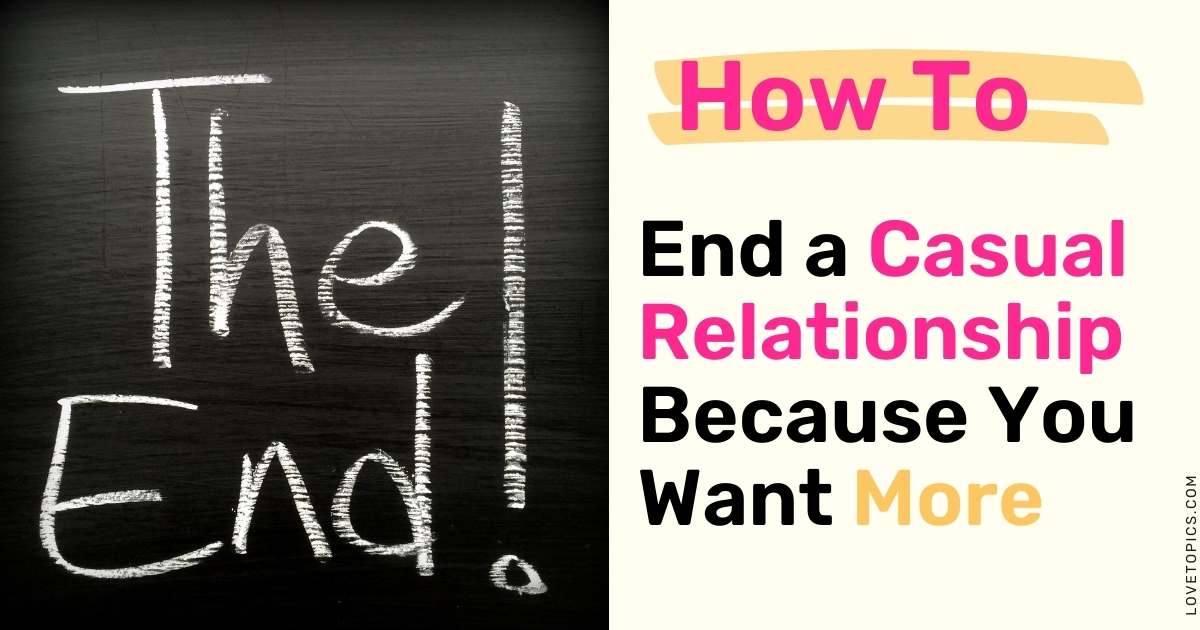 Are you in a casual relationship or situationship, with someone and find yourself wanting more from them? Maybe it started with you both just wanting to have fun. However, over time, you’ve developed feelings for them and now you need more. You’ve gotten to know them and feel like they could be perfect for you. You’re hoping that they feel the same way about you.

One of my longest relationships started out this same way. I had been seeing a guy casually and started to fall for him. So, the next time we were supposed to meet up, I sent him a message and let him know I needed to stop things because I was starting to like him. Turns out, he was feeling the same way and we dated for four years.

It could have gone the other way and we wouldn’t have dated at all if he hadn’t felt the same. But, you never know until you try and you owe it to yourself to be true to your feelings.

So what do you do? You’re falling for this person and you don’t want to get even more attached if things aren’t going to go anywhere. Can you change their mind about sharing something serious? Or do you need to cut ties and find something more fulfilling? Let’s take a look at how you can get out of your casual relationship and either start a relationship with the person you’re seeing or find someone who will meet your needs.

Tell Them How You Feel

Okay, this is the hardest part. You might feel intimidated bringing your feelings up to this person that you haven’t been seeing seriously. Maybe you agreed to keep things fun and easy from the beginning. So you’re not sure how they will react when you tell them that you’ve developed feelings for them.

However, there is a chance that they have started feeling things for you as well. So, it’s worth a shot to talk about it before just ghosting them to save yourself. You don’t have to write them a love letter or get super into explaining all of these feelings that have come up. You can keep it casual and just let them know what’s going on.

Here are a few examples of what you can text or say to them to let them know that you’ve started to develop feelings for them:

“Hey. I don’t think us seeing each other anymore is a good idea. I know we said we’d keep things casual and I’ve started to have feelings for you. I know that’s not what you’re looking for right now so I think it’s best if we end things.”

“I’m not sure if you’ve changed your mind about wanting something serious. But, after getting to know you, I think we would actually make a great couple. I think we have good chemistry and I enjoy spending time with you. If you’re not feeling that way about me, or still don’t want anything more than casual, I understand. I just don’t think I can keep seeing you without it going anywhere.”

Now that you’ve put it out there, you can evaluate the situation based on their response. You’ll probably get one of three answers back:

If they agree that a relationship would be a good next step, that’s great! If they don’t want to see you anymore because they want to keep things casual, that’s good too because you’ll be able to move on.

If they won’t commit to anything serious but don’t want you to move on, that’s when complications can arise. You’ll have to decide if you’re willing to stick around and see if they ever change their mind (heads up, they probably won’t) or if you want to move on and meet someone who is willing to take you seriously.

Get Serious Or Get Out

Now that everything is out on the table, you need to make a decision. If they didn’t run away because you started talking about your feelings, they are either expecting that you’ll start a relationship with them or that you’ll keep seeing them casually.

If They Still Don’t Want Something Serious

If they aren’t wanting anything serious now, we recommend that you save yourself the heartache of waiting around and just move on. They might lead you on for years if you let them. They might say things like “right now isn’t great, but maybe someday” that make you think there is a possibility. However, we know that these people usually aren’t ever going to commit. It’s up to you if you’re willing to put up with this.

If They Want to Move Forward With You

If the person you’ve been seeing is willing to start a relationship with you, you’ll need to discuss how things will be going forward. They need to actually be willing to take things to the next level and commit to you. This means you’ll need to talk about things like being monogamous and what your other expectations are. Since you were seeing each other casually, neither of you had likely been accountable to each other before this.

The only way you will ever end a casual relationship with someone is by talking things out with them. You can decide with them if the relationship can be serious or if you need to move on and find someone who wants the same things as you. You might discover that they aren’t willing to settle down. However, you might find that they have been developing feelings for you too.

You can take their response to you about your feelings and evaluate it to make the best decision possible. Decide if you’re willing to wait around and see if they ever develop feelings for you, move on to the next relationship, or start seeing them seriously. If you end up needing to break things off over text, you can access our guide here.

Wanting More Out of a Casual Relationship FAQ

Yes, you can end things if they don’t want to be in a relationship. You’ll just need to have a conversation about your feelings and what you’re wanting. If they don’t want the same thing, it’s time to move on.

How do I tell someone I want more than a casual relationship?

The best way to get more out of a casual relationship is to talk to your partner about your feelings. Let them know that you want more than what the relationship can offer and see if they’re willing to move forward with you. If they’re not, it’s time to move on. If they are having feelings for you too and are willing to commit to you, then you can start a serious relationship with them.

How do I make him want more than a casual relationship?

There’s no one thing that you can do to make someone want more than a casual relationship. Many women think that a guy will change his mind and start falling for her once they’ve spent a lot of time together. This isn’t usually the case though. You can talk with him about your feelings and see if he’s open to dating seriously. If he isn’t, then you can either wait around and hope he will change his mind or you can end things and move on.

Can you turn a casual relationship into more?

Yes, you can turn a casual relationship into more. You’ll just need to talk to your partner about your feelings and see if they’re on the same page as you. If they are, then you can start a serious relationship with them. If they’re not, then you might need to end things or continue seeing each other casually if you’re willing to settle for that.