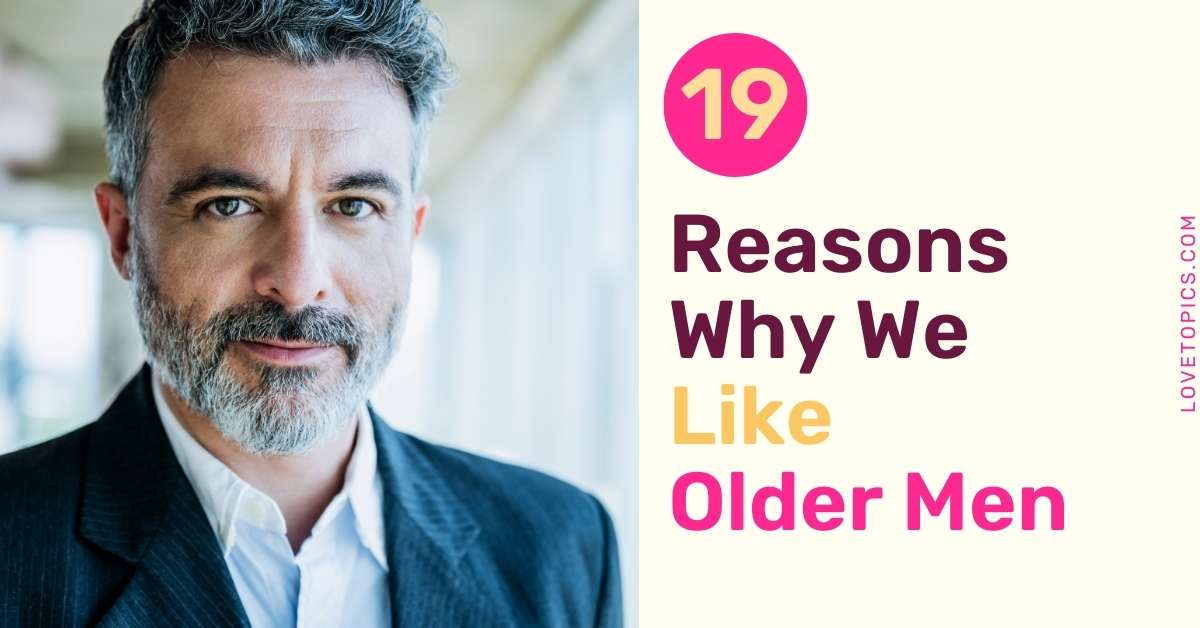 I’ve personally liked older men since my high school days. They were hotter, drove cooler cars, and had more going on for themselves than my younger counterparts. Since then, I’ve always dated men older than myself. I was with someone that was 18 years older than me and ended up marrying someone 7 years my senior.

And I’m not the only one who prefers older men. According to Business Insider, nearly a third of women have dated someone 10 years older than them. So, if you’re feeling weird about liking an older guy, don’t! It’s perfectly normal and even some larger age gaps are generally accepted.

Since women tend to be a little more mature than men, it’s no surprise that they turn to older men for their relationship needs. There are a lot of reasons to like older men. Let’s take a look at some of them.

Reasons You Might Find Yourself More Attracted to Older Men

Sure, there’s more to older men than their physical attractiveness. But, let’s face it, older guys are just plain hot! It might be the stubble, the trace of silver hairs, or the properly formed muscles that get your attention. There are so many things to love about the way these more mature men look. It’s no wonder so many young women are just fine with being with an older man.

Guys this age aren’t still finding themselves. They know who they are and where they’re going. They’ve figured out their career and what they want out of life. Younger guys have the disadvantage of just figuring things out and not really knowing where life is going to take them.

They have their emotions under control and their lives are not a rollercoaster ride. Younger guys are dealing with surging hormones and life changes that they are just trying to figure out. Older men aren’t fueled by their emotions and have figured out how to react in situations and aren’t as jumpy as the younger competition. Women love that they know what they’re getting from a stable man.

4. They Are More Straightforward

Guys with experience aren’t going to beat around the bush. They’ll tell you exactly what they want. Most of them have grown up enough to not want to play games and waste time. Females love this about older guys. They don’t have to guess if he’s into them or what he’s really wanting out of the relationship.

Since they’ve had more time to work on their career, the older ones are usually more successful. They’ve had a chance to complete any education they need and may have even started a business they’re passionate about or worked their way to the top at a company. Success is a huge factor in how attracted women are to a man.

6. They Have More Experience

Older guys just have more experience…. with everything! They’ve lived, dated, and learned how to do things. Life experience is really valuable and contributes to a lot of the other factors that attract women. These guys know what works and doesn’t work for them. Plus, all of their experience makes them way more interesting. They can talk to you about all of the things they’ve done, people they’ve met, and connect way deeper intellectually.

7. They’re Ready to Settle Down

Men who are older have already done a lot of the wild, immature things that guys your age are probably doing right now. The older ones aren’t afraid to shack up and settle down. Depending on their age and lifestyle, they may have already settled down and aren’t looking for that again. However, the majority of them are looking for something real and long-term. They aren’t afraid of what they might be missing out on.

If you’re looking for someone to be romantic, open your door, and make you feel like a million bucks, older guys are where it’s at. They aren’t embarrassed to treat you like gold in front of their friends and know how to treat women respectfully. This is something that younger men seem to still be catching on to.

Okay, some of them still party. However, you’re probably not going to find them with a beer bong at a frat party acting stupid. If the bar scene isn’t for you, an older man might be a great fit. They’ve most likely gotten a lot of craziness out of their systems, but that doesn’t mean they don’t know how to have fun. It’s just a different kind of fun that you’ll remember in the morning.

Confidence is one of the most attractive qualities in a man. As we said, older guys know what they want and where they’re going. They are confident with themselves and their decisions. This strong, sexy quality is probably one of the biggest reasons women love older men.

This goes along with a lot of the other points, but it’s worth mentioning on its own. Mature men just have a different way about them. They don’t get wrapped up in the petty drama, they know how to communicate their feelings, and they take responsibility for their actions. Women respond well to and seek out this type of behavior.

They didn’t just move out of mom and dad’s house and have no clue what they’re doing. They’ve likely been cooking, cleaning, and taking care of themselves for a while now and don’t NEED you to take care of them. They’ll probably even teach you a thing or two about being self-sufficient. Women like this because if a guy can’t even take care of himself, how will he take care of them?

As we said, older guys are more experienced… with everything. That means they’ve figured out how to perform in the bedroom. There isn’t going to be a hurried, unsatisfying performance after which they’re asleep 5 minutes later. Plus, they tend to be more mature with communication and don’t mind asking what your likes and dislikes are.

This probably comes from the self-confidence they have. Older men just don’t get as jealous and petty. They know they have a lot to offer and aren’t going to freak out if some guy looks at his date for a second too long. This doesn’t mean they don’t care. They just know that if you want to be with them, then you will. They aren’t afraid of what some other guy has to offer.

15. They Have Their Priorities Set

Older men have usually had a chance to figure out what’s important to them. They know what their priorities are and they’re not afraid to go after them. They will also communicate those to you so that you’re both on the same page. This is a quality that younger men haven’t had the chance to develop yet.

16. They Are More Emotionally Available

This reason goes along with being more mature. Older men know how to express their emotions and they’re not afraid to do it. They’re also more in touch with their feelings and can share them with you easily. This is a great quality to have in a partner.

You don’t have to be after his money to be able to appreciate that he has it. It’s nice to have a partner who is well-off because it gives them the ability to do more. If he wants to travel, he can do it. If you want to buy a house together, he can do it. You won’t be loaning him money and having him live off of you.

Since their emotions aren’t all over the place, older men offer more security. Also, they have already built a strong foundation in their lives and they aren’t likely to change anything drastically. This means you can feel secure in the relationship and know that it’s not going to fall apart because he decides to quit his job or move to another country.

This reason depends on the particular person. But, in general, older guys can be better partners than younger guys. It’s because they are great at communication, they are direct, and they are stable.

FAQ About Why Some Women Are Attracted To Older Guys

Is there a name for girls who like older guys?

The term for a girl who goes after older guys is “panther”. This is the opposite of the “cougars” which are older women who go after younger guys.

There can be a lot of reasons why someone would be attracted to older men. It could be because they are more mature, they have their life together, or they offer more security.

It depends on the guy. Some older guys like younger girls because they are energetic and fun. However, some think that younger girls are a hassle as they can sometimes bring drama into their lives. It is really common for older guys to go after younger women.

Yes! It’s okay to like older guys and it’s quite common. There are a lot of benefits to dating an older man. Just make sure that you’re on the same page with your relationship.

Why do I always find older guys attractive?

Older guys are not only physically attractive. They ooze confidence, and self-sufficiency, and are great communicators. It’s no wonder you find yourself attracted to them!

How Can You Tell When An Older Guy Is Interested In You?

Since older men tend to be more direct, he will likely tell you if he’s interested in you. He’ll at least show you some clear signs like flirting and taking the time to get to know you.

When Is It Not Okay To Date An Older Man

Age doesn’t matter…. until it does. You should always follow the laws on dating in regards to age. They are there for a reason and protect young girls from being taken advantage of. So, if you’re under 18, you should steer clear of older guys because of the legality and morality of it. Also, if you aren’t ready for a relationship with an older man because of your maturity and life experiences, you shouldn’t jump into anything.

Older men are sought out by younger women for a variety of reasons. They are confident, sexy, and chivalrous, and know what they want and how to be direct about it. It’s no wonder why almost a third of women have dated someone 10 years older than them.

It’s completely normal for women to be attracted to older men. The relationships are more stable and healthy than a lot of those between two young people. Older guys offer more stability and experience which brings a lot to the table.

If you’re wanting to find an older man, dating sites are a great place to do that. Check out our overview of Plenty of Fish and these benefits of online dating.