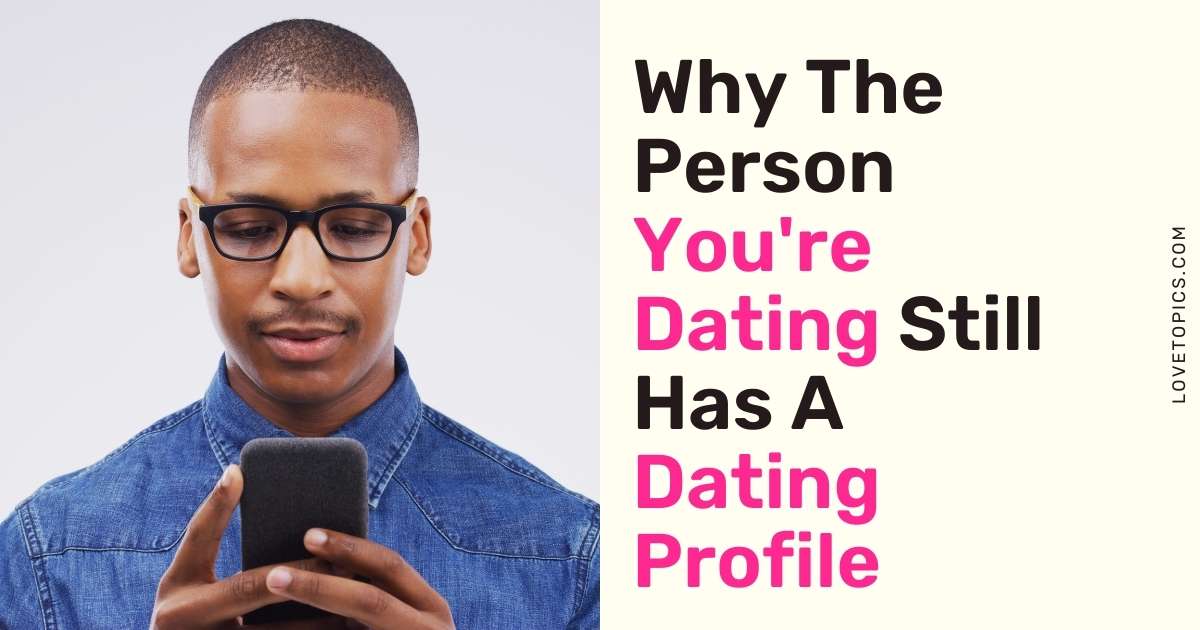 So you met someone online. It’s going well and you’re now dating them regularly. We love online dating for it’s many benefits. But, what happens when you go to delete your dating profile and see that they’re still on there?

There are several reasons their account is still active. They might be keeping their options open or they just haven’t logged in to delete their profile. Let’s look at the different reasons why. Then, you can choose whether to approach them about it or not.

1. You Aren’t Exclusive Yet

If you haven’t had the conversation about whether you’re exclusive or not, they might think it’s just fine to still be active on dating sites. After all, you’re not their boyfriend or girlfriend. If you’re wanting to see if they’re willing to close their accounts and be exclusive, you’ll have to have a conversation with them.

They might just be keeping their options open. Since online dating is so convenient, many people stay on and are always looking for the next best thing. If you’re just casually dating, this isn’t a huge deal. It allows you to continue to see what’s out there as well. As long as you are both in agreeance on the fact that you’re still seeing other people, this can either strengthen a future relationship or help you find a better match.

3. They Are Still Talking to Other People

Just like you probably weren’t talking to just one person online, neither were they. They might have narrowed down their possibilities to just a few people over time. It could mean that they think one of these other people could be just as good of a match as you are. They are still talking with them and feeling things out.

4. They Aren’t Sure It Will Work Out With You

We know it doesn’t take a ton of time to create a dating profile. However, they might be holding onto theirs in case things don’t end up working out with you. In this scenario, they aren’t active on the site, but they haven’t put the effort into disabling or canceling their account. They know if things don’t end up working out, they can jump right back on and try to find success elsewhere.

If you can see that they haven’t been active since you two started seeing each other, they might have forgotten about their account. Or they just haven’t taken the time to log on and close it. This reason is hard to verify, especially if you can’t see how long it’s been since they were logged on. They might even be keeping the profile as backup for reason #4. You’ll have to ask them what’s going on to be sure. Then, if they close their account, you’ll know they just hadn’t thought of it.

What Should You Do About It?

The most straightforward thing you can do is ask the person you’re dating why their profile is still up. This will confirm their reasoning and give you insight into what they think their relationship is with you.

Depending on their answer, you’ll need to determine if you’re okay with them staying on the site and if you both still going to be dating around. Or if you’re willing to also shut down your account and date only them.

If you’ve already stated that you are exclusive, them still having a dating account can be a red flag. However, don’t jump to conclusions until you talk with them. You’ll want to follow up later though and make sure that they follow through with deleting their accounts as this can be a place for excuses and they might be hiding something from you.

When should he take down his online dating profile?

If you’ve been dating and agreed that you are in an exclusive relationship, your partner should take down their online dating profile. If they don’t want to be exclusive with you, then it’s time to have a conversation about your expectations for the relationship.

Why is he still on dating apps?

He could still be on a dating app for a variety of reasons. He is either still using them, keeping his options open, chatting with people he likes, keeping it as a backup, or just hasn’t gotten around to closing his account.

I met a girl on a dating site and her account is still up after we’ve been dating. Should I ask her to take it down?

If you’ve been dating and you want her to be exclusive with you, then it’s perfectly fine to ask her to delete the app and close her account. If she isn’t ready to be exclusive, then you can either both still date other people and take things slow or you can just move on.

How can you find out if someone has an active dating profile?

To determine if someone has an active dating profile, you can find them on the dating site by searching through users. You can also check their email for alerts or see if they have an app on their phone that they’re accessing.

It’s important to remember that there can be a variety of reasons why someone still has their dating account even if they are currently dating you. Maybe they’re not sure if things will work out between the two of you and want to keep their options open. Or maybe they’ve just forgotten about it or haven’t had the time to close the account.

Whatever the reasoning, you should have a conversation with them about what both of your expectations are moving forward. If they have been using dating apps while you’re exclusively dating, this is a big red flag that should be addressed.