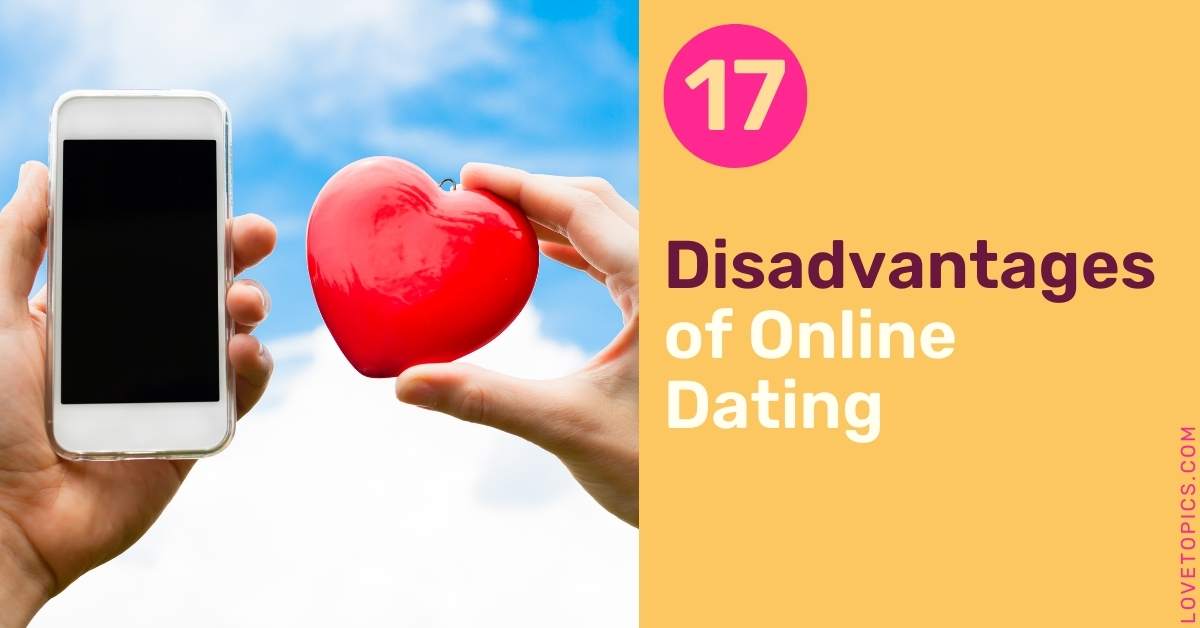 Although there are many benefits to dating online, there are also many disadvantages. From people who create fake profiles to trying to get noticed amongst the many profiles, it can be really frustrating. It’s no wonder why so many people get burnt out and quit before they meet someone. Although we think dating sites can end up being worth it, here are some cons that you should know about before you download that dating app.

The Worst Things About Dating Sites

Perhaps the most frustrating thing about dating online is that you can’t tell who is real and who is fake. Unfortunately, there are a lot of scammers out there who create fake profiles to lure people off of dating sites and con them out of their money and time. They don’t care about your feelings and they’ve made a career out of conning people.

Luckily, there are ways to detect a fake profile, including spotting fake profile pictures. If you take time to weed out the bad profiles, it doesn’t have to ruin your experience. However, it’s really annoying. Some apps, like Tinder, require photo verification and are based on your location. These apps make it more difficult for scammers to have any success.

Even if someone doesn’t set out to be dishonest on their dating profile, it’s easy to tell a few white lies to make yourself look better. People might check the boxes they think will lead them to the most success on the dating site. For example, a guy might say that he is interested in a relationship when he is really just trying to hookup.

The lies don’t stop at users’ profiles either. Once you start chatting with someone, you really don’t know if anything they are saying is true. They can lie about their job, their relationship status, their history, and lifestyle. You won’t be able to verify what they say until you actually meet and get to know them.

3. People You Know May See Your Profile

If you’re wanting to keep your hunt for a partner secret, it isn’t always an option when dating online. If anyone you know is also on the app, they might come across your profile. While there isn’t as much of a stigma around dating sites anymore, it can still feel intrusive when someone you know finds out about your dating profile.

It can be especially awkward if you are a professional and one of your employees or colleagues stumbles across your profile. The fact that anyone can see you putting yourself out there can deter those who don’t want to suffer through embarrassment and even gossip. Other people you might not want to see your profile are family members, friends, acquaintances, and your exes.

4. People You Chat With Can Disappear

You might be engaging with someone for a while and really be hitting it off. Or so you think. Then, out of nowhere, they disappear from the app. You’re left pining over them with no way to contact them and not knowing what happened. They may have met someone else or just got bored with the site.

Depending on your area, there could be hundreds or even thousands of other singles that you’re competing with. The online dating world is way more competitive than meeting someone naturally or through your social circles. When potential matches are scrolling through tons of profiles, you might be skipped over or not seen at all.

6. You Have to Be Witty to Catch Their Attention

Speaking of lots of competition, you need to be able to hold the attention of potential matches long enough for them to consider sending you a message or replying to you. Along with a great profile picture, your headline and about me needs to set you apart from the many others on the site.

Once you start talking with someone, you’ll need to hold their attention there as well. If you seem uninteresting or boring, they might stop talking to you. This can be hard for people whose strength isn’t written communication. It can be stressful trying to come up with things to say that will impress them.

If you don’t make yourself aware of the dangers of online dating, it can be dangerous. People might have other plans with the information you unknowingly give them. Along with theft and other internet crimes, online dating can lead to physical danger if you aren’t careful. Making sure that you let someone know where you’re meeting people offline and taking precautions are necessary to your safety.

Online dating can be really shallow. Decisions are made almost primarily off of your reaction to other people’s profile photos. While physical attraction is important, it’s not everything. However, a lot of people are outshined by others due to their appearance.

Since it’s so easy to start an account, people come and go easily. They might take the time to start chatting with people and then get bored or chicken out when it comes time to actually meet. They might even make plans with you and never show up. Since it doesn’t take a lot of time and effort to start dating on apps, people aren’t always invested and don’t have a lot to lose by not following through.

10. Options Can Be Limited Based On Your Location

If you live in a small town or remote area, there may not be a lot of options for you. There might be the same people to choose from month after month making it hard to find anyone. You’ll either need to branch out to nearby locations or be willing to travel if you meet someone who seems worth it.

The internet is full of trolls and dating sites are no exception. You’ll probably come across people who think it’s funny to send inappropriate messages that aim to shock and harass you. Luckily, you can easily block these people in most cases.

12. You Have to Pay for Advanced Features

Some dating apps make you feel like the only way you’ll really be seen and have success on their platform is if you pay. They have advanced features that make you more visible to other users, but you’ll have to reach for your wallet. It’s true that love is worth the investment. However, there’s no guarantee that these upgrades are really going to get you anywhere.

13. Compatibility Algorithms Can Be Wrong

After having its users fill out lengthy questionnaires, some platforms select your matches for you. In theory this seems like it would speed up the process of helping you find someone. We’ve found that the algorithm isn’t always right though.

You can’t rely on dating algorithms to find you the perfect mate. These computer programs might steer you in the wrong direction while leaving behind people who would actually be great for you. You can use these as a starting point, but don’t rely on them completely.

It’s no secret that dating is usually harder for men. It’s no different online. We’ve run comparisons on a few dating profiles for men and women. Women’s inboxes seem to flood with messages while men’s only bring in a few.

Men usually end up being the first ones to reach out. Like we said, women get overwhelmed with messages and sometimes end up skipping over some. Men really have to work to make themselves stick out from the rest in order to get noticed.

15. Some People Don’t Put a Lot Of Effort Into Their Profile

It can be hard to glean a lot of information from someone’s profile if they don’t take the time to fill it out. You can end up reaching out to a lot of non-matches or skip over people who might be perfect for you. A lot of people are too lazy when setting up their accounts and don’t provide enough information for you to determine if you’d get along.

You’ll see profiles that say things like “ask me if you want to know” and “will fill this out later”. We usually skip those as they don’t seem like they are really serious about meeting someone.

16. People Can Waste Your Time

The reasons that people join dating sites can vary. Not everyone is looking for a relationship or even to actually meet anyone. They might join for a few days just to boost their ego by talking to a few people.

It can be really frustrating to put a lot of time into chatting with someone just to find out they aren’t serious. They might end up saying things like “Oh, I’m just here to make friends.” or “Actually, I am thinking about getting back together with my ex.”. Unfortunately, there’s no clear way to make sure someone isn’t going to waste your time online.

17. People Say What They Think Others Want to Hear

There are a lot of general questions that dating services ask. Many people answer them with things they think others will want to hear. Instead of being honest at the risk of sounding boring, they will fill out their hobbies and lifestyle with unrealistic things.

You have to really get to know someone before you discover what they’re really like. It can be disappointing when the girl who said she loves camping doesn’t even like to be outdoors.

Internet dating can be rough! It’s hard to know what someone’s true intentions are when you aren’t face-to-face with them. There are many disadvantages to dating this way, but the positives end up outweighing the negatives if you don’t have other means of meeting new people. It can still be better than dating a coworker or someone your friends try to set you up with. We still recommend trying it out, but it’s best to be aware of what you might run into out there.