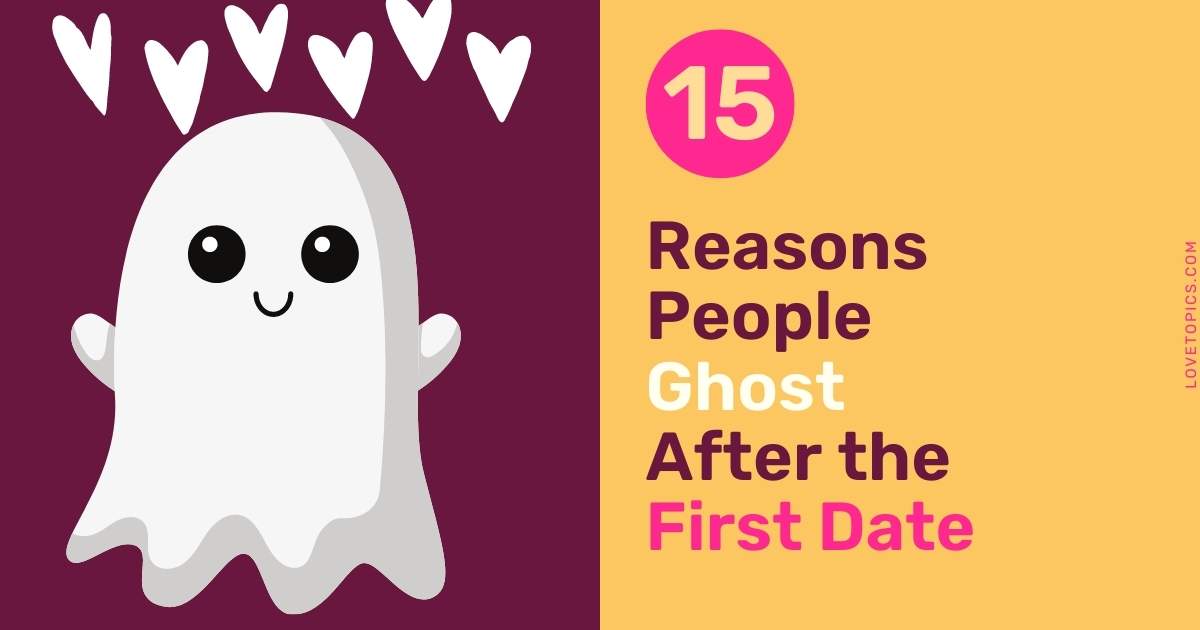 You’re probably reading this because you’ve been ghosted after a first date. It’s happened to all of us at some point, and it sucks. You think everything was going well, you had a great time, and then poof! He or she is gone without a trace. No explanation, no goodbye, nothing.

So why does this happen? Why do people ghost after a first date? Here are 15 reasons they may have ghosted you after just one date.

First, you’ll want to determine if you’re actually being ghosted. If you haven’t heard from them in a few days following your date, they might just be giving you space in fear of coming on too strong. Here are some things to look for when you think you’ve been ghosted after a first date:

If a person isn’t emotionally invested in you, they’re more likely to ghost. Since you’ve only been on one date, they probably haven’t put much effort in yet. That makes it easier to just stop talking to someone and they probably don’t feel like they owe you an explanation for it.

2. They Don’t Want to Hurt Your Feelings

Ending things is hard. It doesn’t matter how long you’ve been seeing someone. Although we know ghosting isn’t the polite thing to do, they might have ghosted you because they didn’t want to hurt your feelings.

They thought that by not telling you the things they didn’t like about you on the date, they were being kinder. It’s hard to let someone know that you found them super annoying or that they just didn’t like them.

Another reason they may have ghosted is that there wasn’t any attraction. This could be a lack of physical or emotional attraction. Don’t focus too much on this as everyone has different tastes. It doesn’t mean there’s anything wrong with you.

Did something go wrong on your date? This may have been what drove them away. Was there something taken out of context? Or did you two argue about something? There is a lot of pressure surrounding the first date. The smallest thing that went wrong could push them away. Also, what is seemingly a small deal to you could be big to them.

Since you don’t know the person well when you’re on a first date, it’s hard to know what they like and dislike. They could be annoyed by things you aren’t even aware of. If you did something annoying to them, they might have lost interest in a second date. This could be anything from chewing with your mouth open to talking about yourself way too much.

6. They Met Someone Else

This person has likely been dating other people if they are seriously looking for a match. They could have met someone else before or after your date and really hit it off with them. They might be ghosting you because their time is suddenly taken up by this other person they met.

7. They Got Back Together With Their Ex

Maybe they didn’t meet someone new. Instead, they could have gotten back together with an ex. This is especially true if they were on a break when you met them. They may not have told you about this because they weren’t sure if they would be getting back together or not.

Now that they are back together with their ex, there’s no need to pursue anything with you. They probably don’t want to explain who you are to their partner either.

8. Your Dating Profile Was Misleading

We hear about people being misleading about their dating profiles all the time. If this is something you did, you can almost be certain this is why they ghosted you.

Did you use a really old picture that doesn’t represent the person you are today? Or did you fill your profile out with a bunch of stuff that isn’t true? If so, that is probably what sent them running the other way.

9. You Wouldn’t Stop Talking About Your Ex

We know it’s hard not to bring up your ex. Especially if you were together for a long time. They may come up when you talk about the destinations you’ve visited or things you’ve done.

However, if you brought them up a lot, it might have turned the person you were on a date with off. It’s not fun to hear about your date’s last vacation to Europe with their ex. It can also make it look like you aren’t over your ex and ready to date anyone else seriously.

Did you go in for a kiss or start planning your second date before they were ready?  This could have made them feel uncomfortable and sent them running for the hills.

When you’re on a first date, it’s important to take things slow. This way, you can get to know each other better before deciding if there is a future here. If you moved too fast, that might be why they ghosted.

A first date is all about getting to know someone and seeing if there’s a spark. If there wasn’t a spark for either of you, it might be why they ghosted.

You can have all the common interests in the world but without that initial attraction, it’s hard to force something. If you didn’t feel it, it’s likely they didn’t either.

12. They Weren’t Sure If You Were Into Them

If they didn’t feel like you showed interest in them, they might have ghosted you because they felt foolish reaching out to you. They may have felt like they flopped the first date or that you weren’t that into them. So, instead of continuing to talk to you, they think things didn’t go well and gave up on there being any potential.

Some people who are dating aren’t really ready to date. They might be getting over a break-up or working through some personal issues. If this is the case, they may ghost you because they weren’t ready to see people. This might not have been realized until they were out with you and didn’t feel right about it.

For some people, ghosting is easier than hearing the word “no”. They would rather avoid any type of rejection by just disappearing. This way, they don’t have to deal with the awkwardness of asking you out again and having you turn them down.

If they don’t handle rejection well, then they might just stay away hoping that you’ll initiate a conversation or second date.

Ghosting After the First Date FAQ

Why did they ghost me after a first date?

There are many reasons someone would ghost after a first date.  Maybe they realized you want different things or maybe there just wasn’t a spark. Unfortunately, you probably won’t find out the specific reason since they have disappeared.

What does it mean to ghost someone after a date?

When you ghost someone, it means that you disappear on them without any explanation. This usually happens after dating or talking to someone for a while. But, it can also happen after just one date.

What if she doesn’t text back after a first date?

She might be busy, afraid the date didn’t go well, or she could be ghosting you if she doesn’t text back after a first date. If she hasn’t responded after a few days have gone by, likely, she isn’t going to.

What should I say to someone who ghosted me after a first date?

You don’t have to say anything to someone who ghosted you after a first date. Don’t feel like you need to text them to acknowledge it. If you happen to run into them somewhere, they probably won’t bring it up.

There are many reasons someone may have ghosted you after just one date. It’s easy for them to just quit talking to you after a date didn’t go well because they don’t know you well and probably weren’t talking to you long before you met.

You can speculate as to why they ghosted, but unfortunately, you probably won’t ever hear the exact reason. It’s best to just move on and try not to dwell on finding the reason. You can move forward knowing that the two of you weren’t right for each other.